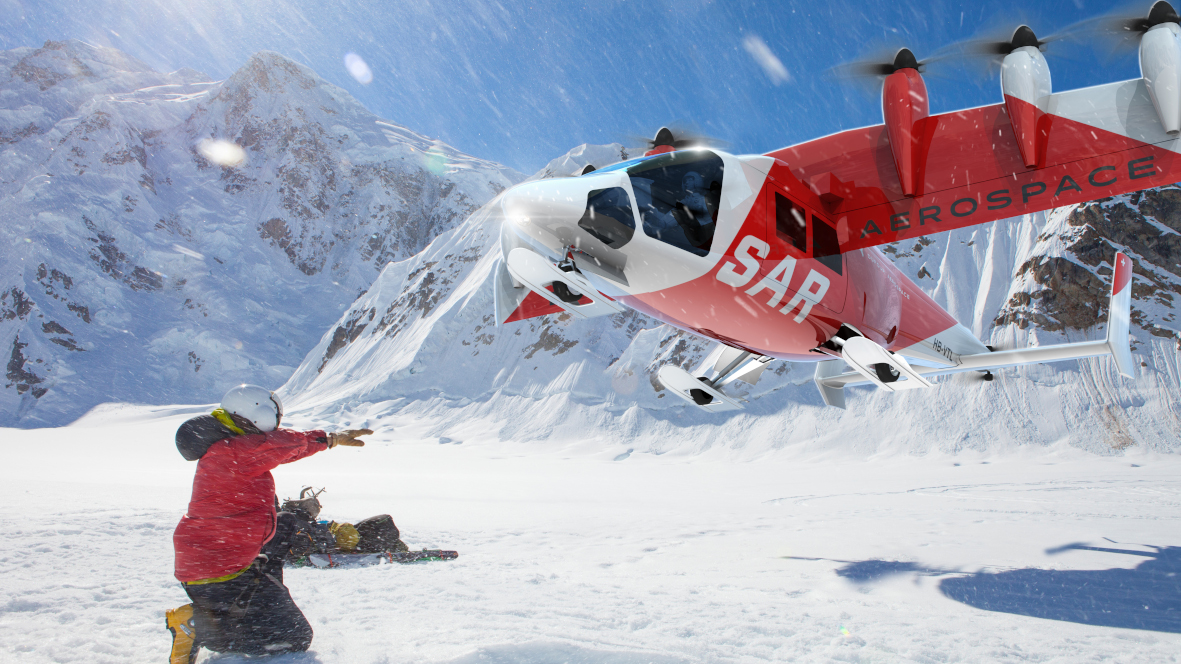 Zurich, September 8, 2021 / Today, Dufour Aerospace and Swiss Air-Rescue Rega – the leading Swiss air rescue organization – announced development cooperation for the air ambulance version of Aero3, Dufour Aerospace’s new and innovative aircraft for patient transport and emergency medical services. The Aero3 is the first of its kind to feature a tilt-wing design with exceptional space, load, and range for emergency medical services (EMS) and patient transport. This piloted, hybrid aircraft is an extension of the Aero2, a smaller, unmanned version of the aircraft first test flown by Dufour Aerospace in 2020. During product development, Rega will support Dufour Aerospace with know-how on medical and aviation equipment and will advise on operational standards and certification. Dufour Aerospace offers Rega the opportunity to influence the development of the Aero3 at an early stage.

"Continuous development is in Rega's DNA. The Aero3 is an exceptionally interesting aircraft, and we want to support its development with our experience from 70 years of HEMS operation”, said Rega CEO Ernst Kohler.

Said Thomas Pfammatter, CEO of Dufour Aerospace: "The collaboration with Rega will challenge Dufour Aerospace and advance our product development. They are a global leader in air rescue with the highest standards. Through this partnership, we will better understand and meet the needs of our customers. The Aero3 will meet the requirements for demanding patient transport, combining vertical take-off with sufficient load, high speed and range. Aero3 will be more efficient, less expensive and quieter than today's helicopters and will integrate seamlessly with existing infrastructure and systems.”

Swiss Air-Rescue Rega was founded in 1952 and provides rapid and professional medical assistance from the air for people in emergency situations. To do this, it uses the best possible trained and most experienced staff as well as the most modern rescue helicopters and ambulance jets. To fulfil its mission, Rega reaches every location in its operational area in Switzerland within a 15-minute flight by rescue helicopter. This is made possible by thirteen operational bases spread throughout the country. With three of its own ambulance jets, Rega also flies sick or injured people from abroad back to their home country. Rega acts based on medical necessity and places itself at the service of the patient. As a private, non-profit foundation, it acts independently of the state or financial interests. Rega is supported by more than 3.6 million patrons, whose annual contributions keep Rega in the air for the benefit of the Swiss population.

‍Dufour Aerospace develops efficient and ecological aircraft for patient and passenger transport, logistics and public safety. Dufour Aerospace relies on the tilt-wing principle: the tilt-wing aircraft Aero3, which is currently under development, takes off and lands vertically in the smallest space like a helicopter, but flies as fast and economically as an airplane. While the propellers are electrically driven, hybrid elements (conventional turbine or fuel cells) ensure a sufficiently long range (hybrid propulsion). In addition to the Aero3, Dufour Aerospace is also developing the Aero2, an unmanned aerial vehicle (drone) that is also based on the tilt-wing principle.