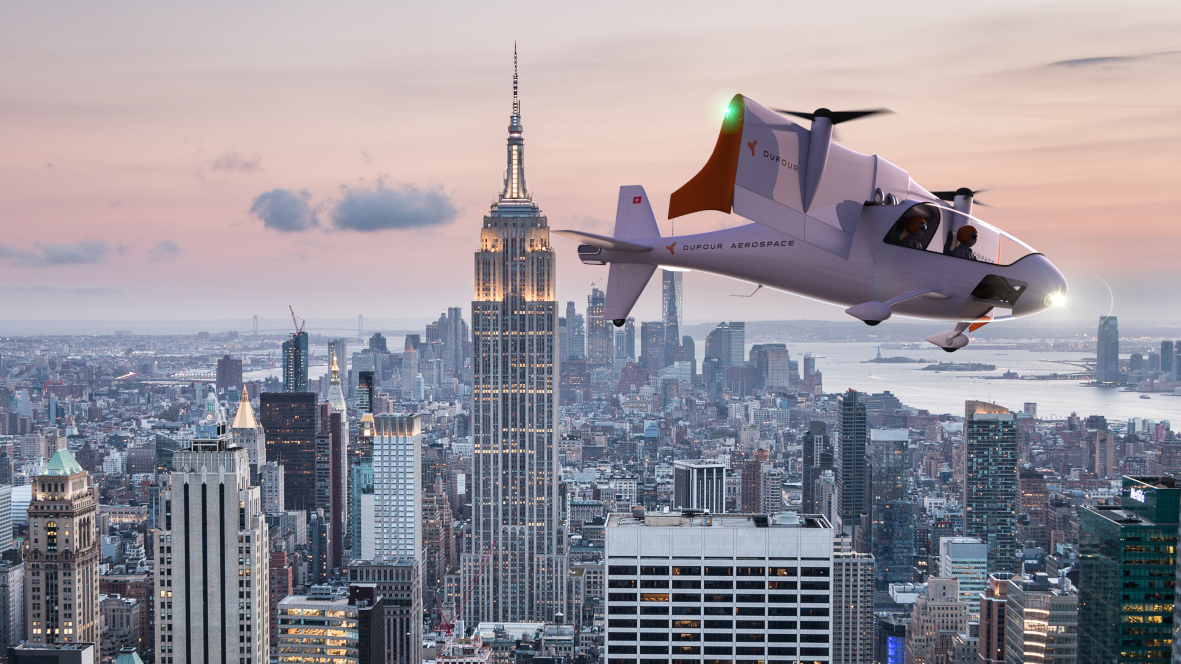 Dufour Aerospace announced today the development of their latest aircraft, the aEro 2. Building on the success of the aEro 1 electric aerobatic plane, the aEro 2 will have vertical take-off and landing (VTOL) capability and incorporate a modular hybrid-electric power system.

The Dufour aEro 2 can take off and land vertically like a helicopter thanks to its proven tilt-wing design, yet can cruise at speeds of up to 320km/h like a plane. The two-seater aircraft takes full advantage of modern electric propulsion and modular power delivery systems. In its fully electric, zero-emission configuration, the aEro 2 has a range of 120km. An optional auxiliary power unit can be fitted in a hybrid configuration to extend the range up to a total of 800km. The combination of electric propulsion and large propellers give the aEro 2 a much quieter noise profile than conventional helicopters and planes, and is extremely efficient - aEro 2 will offer fast air transportation at the same cost per km as a car but with less environmental impact.

Dufour Aerospace brings together an all-star team. Dominique Steffen is CEO of Kissling & Zbinden, paragliding champion, and aerobatic pilot with over 5000 hours flight time. Thomas Pfammatter has been CEO & CFO of multinational companies and has over 10,000 hours experience as a rescue helicopter pilot with Air Zermatt. Dominique and Thomas began work on the aEro 1 in 2015 and turned their attention to aEro 2 in late 2016. Jasmine Kent joined the team in 2017, bringing 8 years of experience in software engineering with Google and expertise in safety critical systems development.

With the Hamilton aEro 1 aircraft, the Dufour Aerospace team gained hands-on experience with the design, construction and operation of manned electric aircraft, and has to date more than 50 flight hours including demanding aerobatic manoeuvers. This makes the team one of the most experienced in electric flight worldwide.

Development of the aEro 2 has progressed from the conceptual stage to detailed modelling. Computer simulations have been used to iterate on the design and verify the extremely stable handling characteristics of the aircraft. A remote piloted 1:5 scale model has further confirmed the aEro 2's handling and versatility.

Dufour Aerospace has established a partnership with advanced avionics supplier Daedalean to develop fully autonomous operation of aEro 2 in the future.